10 Cities To Settle In Canada: As a new immigrant who wishes to live in Canada, it is important to know the best cities to pick as a place of residence/settlement. Immigrating to Canada is an amazing decision, the country provides you with wonderful opportunities for career growth and development. But the most difficult decision to make while planning to immigrate to Canada will be choosing cities to settle in Canada. 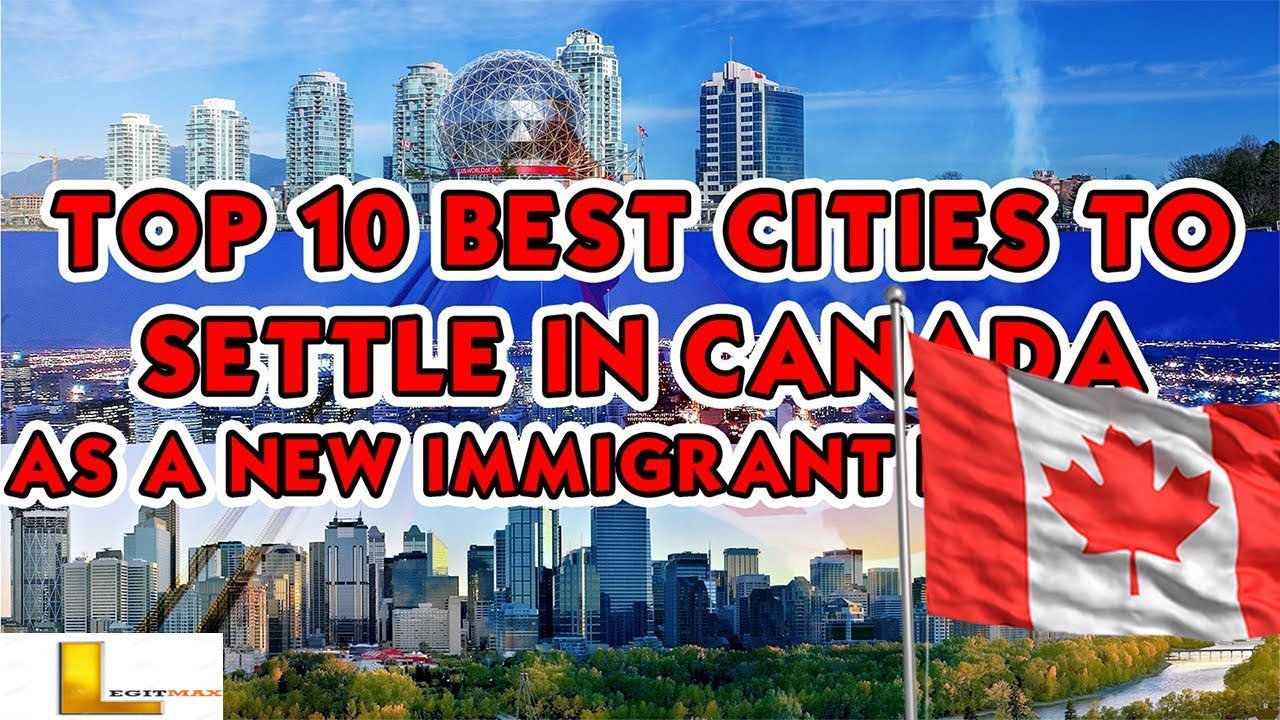 Factors like job availability, average life satisfaction, ease of doing business, level of development of the city are all factors to consider when choosing a city to live in. In this article, we will look at the best 10 cities in Canada that you should definitely consider settling into when relocating to Canada in 2021. Just to be clear, these cities in Canada are also referred to as Provinces.

Before now, we talked about the best provinces to find jobs In Canada. If you haven’t read that before, we highly recommend doing so.

Why Immigrate to Canada?

Canada is the ideal destination for most foreigners seeking employment opportunities to achieve a better life abroad for themselves and their family members. The country has a stable and diverse economy with a high standard of workplace safety and also offers competitive wages and many unique opportunities for professional growth and development.

However, with the recent economic and political issues that are ongoing across the globe. It is a surprise that Canada has become the general destination choice for immigration. Canada is in need of immigrants as immigrants are in need of Canada. The country is believed to have been built by the contributions of immigrants and is still in need of more skilled workers who can help boost the country’s economy.

Canada welcomes every foreign national regardless of race or religion, committed to the idea that the country’s economy can become more stable by the contributions of others. With the strong economy, one of the highest rates of employment opportunities, competitive wages, cutting-edge education, etc. Immigrating to Canada is definitely one of the best decisions of a lifetime. Moreover, working in Canada is an excellent first step for those seeking to immigrate to the country permanently.

Top 10 Cities To Settle In Canada As A New Immigrant

Again, in recommending these cities as the best provinces to settle In Canada, we put into consideration, necessities like jobs, the average cost of living, quality of life, business, weather, stable economy, low crime rate, and other basic needs.

Without further ado, these are the best cities to settle in Canada as a new immigrant;

The Higher Institution called the University of Waterloo because of its STEM program helped to transform the city of Waterloo into a major technological center in Ontario. This city has a population of over 103,000 people.

The average house price per year in Waterloo as of 2019 is over $60,000 though it is higher than the Canadian average for a one-bedroom rent. Waterloo is a very affordable and secure city to settle in Canada.

Burlington has since the 1950s been referred to as the Golden Horse Shoe because it has a horseshoe shape as it stretches from Oshawa to Niagara Falls. Half of the population of the whole of Ontario is located in Burlington.

Burlington is a very tidy, peaceful, and secure city to settle in as an immigrant. The city has many major companies like Hamilton’s Steel Industry, it has a manufacturing base, and more. The population is over 183,000 people. In short, Burlington, Ontario has the most affordable housing and is the best place to raise kids.

Calgary is the largest city in Alberta and the third-largest in Canada. The city has an abundance of opportunities in and it is fairly affordable. The city has a diverse and thriving economy, and also plans of expanding more on its traditional energy, transportation, agricultural businesses, and develop a broad array of newer industries and sectors such as health & life sciences, financial services, tourism, and creative industries.

Calgary has a large number of head offices in Canada located in it and it also has a very busy airport. This city is also very diverse with minority populations from around the world located in it. To sum up, Calgary is the best city to raise a family, it is affordable and job opportunities offer high income.

They overtook the city of Toronto to become one of the best cities in 2021 mainly due to the high-quality health care system. Vancouver is located in the Lower Mainland of British Columbia (BC) and consistently ranks as one of the most livable cities in the world. Considering Vancouver as one of the cities to settle in Canada will give you zero worries about your health and where to find a doctor. Vancouver has a great healthcare system.

Moreover, most people have no need to have a car as transportation in Vancouver is excellent and takes you to wherever you need to go in the city. As an immigrant apart from the high life satisfaction in Vancouver, it also has many unique tourist attractions.

Toronto is the provincial capital of Ontario and the largest city in Canada. It has a world-class media and film industry just like Vancouver has. Toronto has a population of 3 million people and half of them were born outside of Canada. Many immigrants choose to settle down in Toronto due to its large size and foreign community diversity. It is easy to meet people from a wide variety of backgrounds and cultures.

The technological, industrial, and financial industries in Toronto are top-notch more than in other Canadian cities. Also, housing in Toronto could be very expensive. An average meal at a restaurant costs $20 and a 1 bedroom rent a year costs an average of $2,158. In short, Toronto is a family-friendly city, a cheap place, and offers many job opportunities.

Ottawa though usually not a top choice for immigrants is a city that we highly recommend. Because politicians live in this city, they have ensured that there are a number of first-rate healthcare facilities in the city.

Ottawa has a number of good universities, rural attractions, good public schools, and affordable housing. Ottawa is a great city to settle in as an immigrant. Moreover, Ottawa is the capital of Canada and is located in the Eastern part of Southern Ontario. It has a lower cost of living and is considered one of the safest places in the country when compared to other cities in Canada. To sum up, is an ideal city for the best education, raise a family, and retire.

With a population of people close to 800,000 people, Mississauga is a very diverse city with a number of Arabic, Vietnamese, Polish, Russian and more speakers.

Because there is a significant number of immigrants, you as a new immigrant can network and settle down easily in your new home. The Pearson International airport in this city.

Surrey is a suburban city south of metro Vancouver. It has a population of over 500,000 people and about 32% of this population is made of South Asians.

Markham is just North of Toronto city and has over 50% of its population as immigrants and the Chinese make up a vast majority.

There are so many tech and life science companies operating out of Markham, up to a thousand of them. This city is heaven for you if you are a skilled immigrant.

Longueuil has a population of about 240,000 people. This is Canada’s 20th largest city. Longueuil has been trying to grow its immigrant population from the 10% that it is. The cost of living and housing is very affordable compared to other big Canadian cities.

Benefits of Immigrating to Canada

Furthermore, here are the advantages of choosing to move to Canada, more like further reasons to immigrate to Canada.

Cities to Settle in Canada: Conclusion

According to the new rankings from MoneySense magazine, new Canadian immigrants should be beating a path to Burlington, Ontario.

The city boasts of great employment opportunities, low crime rates and a community in Canada, and a place to raise a family. More than half of the city is protected rural space.

Burlington offers world-class urban amenities, including shopping and dining, and is home to some of Ontario’s top festivals and events. Attractions include the Royal Botanical Gardens and the Burlington Performing Arts Centre.

There you have it. These are the top 10 cities to settle in as a new immigrant in the year 2020. If you have further questions, please do not hesitate to ask using the comment box.

Note: You have more to gain on you asking more questions on 10 Cities To Settle In Canada. And more other Sign Up, Immigration. Work and study abroad like USA, Australia, UK and other developed countries are all on guidelines Here.

What you should know About Immigrating to Canada